@ALL LOCATIONS IN VANUATU 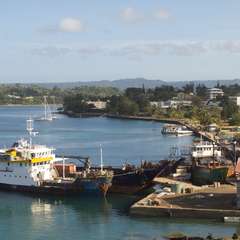 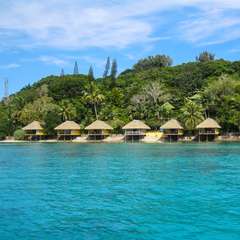 Vanuatu (VU) is an archipelago nation comprised of 83 islands situated in the southwest Pacific Ocean, north of New Zealand and east of Australia. The islands are grouped into six regional provinces, with the largest city, Luganville, located on Espiritu Santu, and its capital city of Port-Vila on Efate.

Unlike many tropical destinations, the archipelago has a variable climate with hot and humid conditions in the north; mild and dry in the south. Tourism peaks from July to December (in the Southern Hemisphere summer), while heavy discounts can be found the rest of the year.

Vanuatu is home to a number of cruise ship ports, so many attractions get busy during the day, and the city centers clear out at night. The majority of activities are nautical: boating, diving, and fishing, and beach resorts dominate most island coastlines. Due to its isolated location, travel expenses in Vanuatu are on the high side of the South Pacific spectrum, which belies its perception as a budget destination.

The most convenient and time-efficient way to explore is to rent a car in Vanuatu. Public transportation is paltry within and without the two major towns, and many destinations are spread out around the islands.

You’ll be much more comfortable behind the wheel of a private vehicle. There are two main challenges to driving in Vanuata. First, the only paved roads are found in Luganville and Port-Vila, and where congestion is unbearable during peak travel times.

Second, Vanuatu drives on the right side of the road, but all vehicles are left-hand drive. Meanwhile, the maximum speed limit is 80 km/h, but you probably won’t be doing much over 60 km/h.

Roads are not known for being well-marked, and then there are the potholes. It rains a lot in Vanuatu, and that means frequent washouts and impassable lanes. On the bright side, many of the top destinations are within easy reach of the major routes and a rental car in Vanuatu will open up areas that you would otherwise miss.

Cheap car rentals in Vanuatu are supplied by the most reliable names in car hire — Avis, Hertz, Sixt, Europcar, National, and Thrifty. Economy and midsize SUVs dominate the selections, but you can also choose from minicars, compact and fullsize sedans, estate wagons, and 7-12 seater minivans.

Tips and advice for renting a car in Vanuatu

Vanuatu car rentals do not include Collision/Loss Damage Waiver or Theft Protection.

Drivers under 30 years old will be subject to underage driver’s fees in Vanuatu.

Due to poor road conditions, driving at night in Vanuatu is not recommended.

All-wheel drive vehicles are strongly preferred for travel in Vanuatu.

Conduct a thorough inspection of the vehicle before signing the rental contract, making sure to document pre-existing damage, and testing all the main functions of the vehicle, including brakes, air conditioning, turn indicators, etc.