@ ALL LOCATIONS IN
Puerto Rico 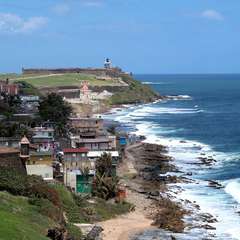 Puerto Rico (PR) is an autonomous island commonwealth of the U.S., situated 1,600 km (1,000 mi) southeast of the Florida Keys in the Caribbean Sea, east of the Dominican Republic and west of the U.S. Virgin Islands. In general terms, Puerto Rico is regarded as a high value, low budget destination for tourism, mainly centered on natural attractions. The commonwealth also includes a collection of 17 minor islands including Vieques, Culebra, Culebrita, and Palomino, and a handful of other mostly uninhabited islands. The roughly rectangular main island is dominated by a central mountain range rising from its west coast, and capped by a northern coastal plain where most of the population resides. Tourist activities are generally concentrated around the elongated oval coastline in the cities of San Juan, Ponce, and Mayaguez, and the minor islands. Only 110 km (180 mi) end to end, and 64 km (40 mi) top to bottom, the majority of Puerto Rican destinations are within relatively easy driving distance. The island’s remote western interior is noted for rugged terrain and prohibitive driving conditions.

Getting around by car is significantly more convenient and efficient than using public transportation, which consists of an overburdened bus system in Metro San Juan. Buses don’t run on a schedule to outlying areas; a one-hour bus ride could turn into an all-day ordeal. Thus, visitors will rent a car — which are comparatively inexpensive to mainland U.S. rates — or rely on increasingly expensive and unreliable taxis. Smart travelers choose the former and save the latter for late-night partying. Fortunately, most major highways are up to first world standards — or close enough. Minor roads, rural tracks, and inner city streets are a different story. In addition to toll-free national highways (carretera), there are four major toll roads (autopistas) originating in San Juan that circumnavigate most of the chaos and congestion of regular roads, and well worth the price of admission. Meanwhile, local drivers are notoriously freewheeling, not just by Western standards — by all standards.

Tips and advice for renting a car in Puerto Rico

Travelers from any non-U.S. territory are advised to check with their credit card companies and insurance carriers to make sure they’re covered on car hires in Puerto Rico.

Between the hours of midnight and 5:00 AM (00:00-05:00), drivers are allowed to continue through a red light after coming to a complete stop.

Puerto Rico is not a terribly affluent commonwealth and many cars on the road are showing signs of age and abuse. This only fuels the carelessness of drivers with little to lose in any sort of traffic accident. The general rule of thumb for visitors is to drive with the cautious idea that you never have the right-of-way.

All toll roads are exclusively electronic collection. Most car rentals in Puerto Rico are equipped with toll transponders that calculate your total, payable at the end of your rental.

Highway signs are generally posted at rural intersections, but destinations and bearings (north, south, etc.) are almost never present — unless posted by some well-meaning locals.

GPS and Google Maps are a necessity for all visitors driving in Puerto Rico, but be forewarned that they’re not infallible. It’s recommended that you grab a good road map before heading out in your car hire.

Are you driving a rental car in Puerto Rico?

Frequently asked questions about renting a car in Puerto Rico

1. What is the best time of year to book a rental car in Puerto Rico?

2. Is it possible for one way rentals in Puerto Rico?

3. Should I rent a round trip or one-way rental in Puerto Rico?

4. Which location should I rent my car from in Puerto Rico?

5. Do I pay more fees and taxes for renting a car at the airport in Puerto Rico?

6. What insurance do I require for driving a rental car in Puerto Rico?

7. What is the best way to save money on rental car insurance in Puerto Rico?

8. Should I prepay my rental car booking in Puerto Rico?

9. What are the largest numbers of vehicle seats available for a rental car in Puerto Rico?

10. What types of sports and special cars are available in Puerto Rico?

11. Can I take my rental car across borders in Puerto Rico?

12. How do I inform the rental company I will be crossing a border from the Puerto Rico?