Search For Your Rental
IN IRELAND OR NEAR YOU
Pick-up 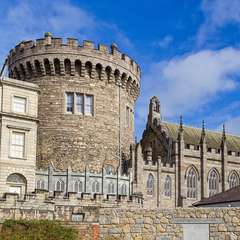 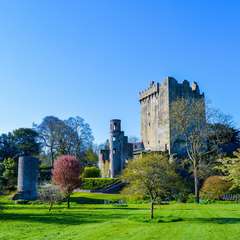 The Republic of Ireland (Ireland / Eire ) is a European country and occupies the largest part of the Island of Ireland, the other part being Northern Ireland which lies in the United Kingdom.

Ireland is known for its rainy climate, but when the sun shines you will witness the most intense green fields and blue skies.  From Dublin, the capital, one can undertake many day drives. Some of the best to consider are the Wicklow Mountains, Cliffs of Moher, Blarney Castle & Cork, Kilkenny Castle & City, Giant's Causeway & Carrick-a-Rede Rope Bridge, Belfast Day Trip & Titanic Experience, Connemara & Galway City and the town of Kerry.

Renting a car in Ireland is the only way to see the real Irish countryside. However, when driving in Dublin, you will encounter city traffic and parking is at a premium.

There are many new, fast motorways in Ireland, but the country is essentially rural and rural traffic is the norm. During harvest season one can often encounter large and slow farm machinery around every corner. And if that is not daunting enough you must be prepared for wildlife and domestic animals to suddenly cross the road. You might even come around a corner just to find cows or sheep resting in the middle of the road.

Ireland toll roads are worth the money, as in most cases it cuts down travel time significantly. But when travelling on the narrow and winding rural roads, it is recommended to let large vehicles pass - unless they are clearly stopping for you.

The international car rental agencies in Ireland include the major brands such as Hertz, Alamo, Avis and Europcar. Whether you need a family sedan, SUV or minivan, our car hire booking portal makes it easy to choose from a selection of cars. You can also add extra benefits to your Irish car rental, such as a GPS or child seat. However, to ensure the best cheap car rental prices in Ireland, we recommend that you book online in advance and use our site to compare offers.

It is also important to read and understand the conditions of your car rental before signing.

Tips and advice for renting a car in Ireland

The traffic laws will differ slightly between the Republic of Ireland and Northern Ireland.

Road signs in Ireland can be a bit old-fashioned, so it might be best to use a GPS or you could easily end up on the wrong country road.

Place names are listed in both Irish and English, and the distances are given in kilometres and miles.

Generally, shops are open from Monday to Saturday and part of Sunday, closed on public holidays. Exact timings differ a lot, especially in rural areas.

In rural areas petrol stations can be few and far apart, and almost none of them offer a 24/7-service. Remember that not all fuel stations take cards, so best to keep some cash handy.

Get a Heritage Card for just €25. It provides free admission to all fee-paying state-managed heritage sites in Ireland, including castles and national parks, for one year.

Kiss the Blarney Stone; find a leprechaun and his pot of gold are fun reasons, if not mythical ones, to visit Ireland.  In fact, the art of storytelling is rampant and many monumental sites have two explanations, the credible and the long tale. The north and south divided island offers some incredible features that make it tangibly unique, and provides some great drives in your Ireland rental car, just watch out for sheep that have little regard for roads. Time to go.

Tucked up in the northern part of Northern Ireland, and familiarly known simply as Derry, this city offers old world charm with the contemporary.  The whole island is dripping in history, but Derry is the only city that has a wall around its inner periphery still completely intact and can be walked.  If you prefer to have a pictorial representation of the city’s history, just outside the 17th century walls on the tourist trail, street artists have depicted scenes of the past on walls and buildings.  Ireland accommodations are plentiful in this city with something for every preference.

To experience some truly incredible scenery, the 198 km (123 miles) Antrim Coast Road, also known as the Causeway Coastal Route, is a continuous revelation of jaw-dropping sights and ranks up there with some of the world’s best coastline trips.  It’s possible to even see Scotland in certain areas on a clear day.  Beginning this drive in Derry you’ll be able to do this easily in a day if you only go as far as the Giant’s Causeway, 64 km (40 miles), a volcanic rock formation that disappears into the ocean.  By all means continue for loads of breathtaking scenery, but you’ll need to find an inn for the night if you’re staying in Derry.

What might be considered Ireland’s version of Australia’s Ayers Rock, this town has Table Mountain, or Benbulben, as a distant backdrop.  Be sure to ask a local about some of the legends that abound for this geographic wonder.  With world-class golf courses in the area, immense sand beaches and numerous walking trails, this town is up to the task of delivering a wonderful vacation.

A car ride to nearby Benbulben, 16 km (10 miles) is an Instagram opportunity for great photos with the ever-changing colours of this mountain depending on the time of day.  There are paths up the mountain for incredible views over the countryside.  Travelling a little further north is Donegal, 64 km (40 miles), with some of the highest sea cliffs in Europe found in this region.  The most difficult part is deciding when to turn around and head back.

Many cities around the world lay their claim to fame for some product or industry, and for Cork it’s butter.  Cork butter was made and sent to far off locations beginning in the 19th century, and it was at the Cork Butter Market where transactions were finalized.  Today, although butter isn’t sold at the Market, it is now a museum detailing what was an important industry.  The Cork City Gaol is also defunct, but again this oppressive building that resembles a castle can be toured.  Since you’re so close, why not get your dose of charm from the Blarney Stone, 8 km (5 miles), but it’s not as easy as you might think.

When in Cork, the famous Ring of Kerry Drive can’t be missed that passes among storybook landscapes, by waterfalls, and through towns perched on the coastline.  To find the road travel to Killarney, 85 km (53 miles), and 179 km (111 miles) later you’re back to where you started.  The roads are often very narrow so it’s definitely not a trip you want to hurry, but you won’t regret it and keep your camera poised.

If there ever were a country where a car is important, Ireland would be it with so much to see in relatively short distances.  When you use Cheaperthancars you’re getting affordability and reliability, and when teamed up with Cheaperthanhotels it’s truly an economizing combination. We really do believe that the less you spend, the more you can afford to do when you get to Ireland for your trip.

With beautiful countryside of Ireland, driving a car to explore Ireland has to be one of the best ways. But narrow roads and infrequent shoulders might leave you a little fearful of driving. Not to worry, this guide will provide you with some important facts pre-trip so you can face the roads free of anxiety.

The following speed limits should be strictly adhered to when driving your vehicle in Ireland:

There may also be special speed limits around schools and other locations of 30km/hour (18mph).

Any driver who fails to adhere to these speed limits is subject to the penalty point system in Ireland, affecting future driving in this country.

It is illegal for anyone to use speed meter detectors. If found to be doing so, your vehicle will be seized.

Not adhering to the speed limits will incur a fixed charge with penalty points. You will have 28 days to pay the fine.

For fully licenced drivers, 50mg of alcohol per 100ml of blood is the legal Blood Alcohol Content (BAC) limit. For professional and learner drivers the limit is 20mg.

Police in Ireland have the authority to carry out random breath tests at any time.

If you are found to be below a certain limit, you will be issued with a fine to be paid within 28 days.

Found above a certain level, you will be issued with a fine and possibly spend time in prison.

You could face the maximum fixed penalty fine or 6 months in prison or both. You will also have your licence revoked.

Parking charges in Ireland can vary depending on where exactly you are.

There are different parking types throughout Ireland which include; disc parking, permit parking, pay and display, and other car parks.

If you are issued with a parking fine, it must be paid to the correct authority within 28 days. Failure to pay within the specified time will result in an increase in the amount. If another 28 days pass, then you will be taken to court that might result in penalty points and another fine.