@ ALL LOCATIONS IN
Germany 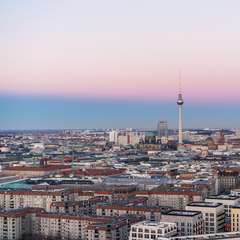 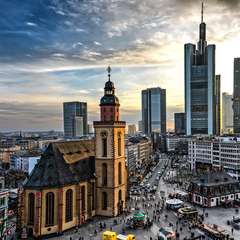 With enchanting landscapes, delicious food and a rich history that meets a dynamic present, Germany has it all. Geographically diverse, this Central European country has approximately 83 million people spread over 357,386 km square kilometers (about 137,988 square miles). An outdoor lover’s dream, it is best discovered by booking a car rental. From the North Sea to the vineyards of the idyllic Middle Rhine Valley, which has gently rolling hills, rivers and castles, there is something for everyone in Germany.

Berlin is known as a high-paced and dynamic city that is a leader of contemporary European culture. Munich is the capital of the stunning Bavaria region, where you can enjoy Oktoberfest every autumn. In Bavaria, don’t miss the fairyland castle of Schloss Neuschwanstein (in Füssen). In the southeast of the country, discover the gorgeous Bavarian Alps (or Bayerische Alpen in Germany), which form a geographical border with Austria and offer a variety of beautiful ski resorts and villages.

For the most part, Germany’s roads are outstanding. Drivers from abroad may fear getting on to the Autobahn, Germany’s notorious highway system which for the most part does not have speed limits (except in some areas or certain cases, such as when there is construction work; in these areas, drive carefully, as you can automatically be issued a speeding ticket). The most important thing to remember about the Autobahn is to avoid the left lane, where you will find the fastest drivers. If there is a sudden slowdown, be sure to turn on your hazard lights to warn the drivers behind you.

Major Germany car rental providers include Enterprise, Sixt, Europcar and Alamo. You can rent a car in Germany made by one of the internationally recognized local luxury brands, such Mercedes-Benz or BMW. Alternatively, you can hire a cheap car rental option with an economy compact car such as a Volkswagen, which is perfect for solo travelers or couples. For larger groups headed to the mountains to ski, a 7—12 person mini van or people mover can comfortably carry multiple people, as well as their sporting equipment.

Tips and advice for renting a car in Germany

You may run into inclement weather, such as snow and ice, during the winter, especially in the more mountainous areas. Before your trip, be sure to read up on the forecast, and learn about the typical weather for the area you will be traveling to.

Inside city centers, keep in mind that you may encounter many one-way streets; to deal with this, there are designated areas where you can make a U-turn.

Some city centers have a special zone to reduce emissions (“Umweltzone” in German). If your car hire does not meet the zone’s environmental safety requirements, you will not be able to drive in it.

Seatbelts are mandatory, and you are not allowed to talk on the phone while driving your car rental in Germany.

Beware of people riding bikes on or near the road, which is especially common in German cities.

Note that you are not allowed to turn right on red in Germany.

Are you driving a rental car in Germany?

Here's some more in depth Germany driving rules and guidelines for car renters:

Germany has the highest accident rate of any European country because it has more traffic than any other country, as well. Therefore, you need to know the rules of the road to stay safe while driving as a tourist.

The minimum age for a full license in Germany is 18. A person who is 17-years-old may have a license to drive with a parent or adult in the car.

Unless otherwise stated, following speed limits must be adhered:

Speeding fines start at 15 euros in cities and 10 euros in the country. They increase incrementally depending on how fast you are going above the speed limit and can be as much as 680 euros.

Germany has fairly strict laws for drunk driving. You can be in trouble for a Blood Alcohol Content (BAC) as low as 0.03g/100ml (if it changes your behavior). Penalties can include not being allowed to drive in Germany, as well as hefty fines. Generally, it is best to not drive at all after drinking.

In most places, you’ll be able to park on the streets. Do not block driveways or roadways; also, do not park too close to an intersection.  However, you may need a special parking sign (Parkscheibe) to place on your car, available at gas stations. With it, you signal to the police when you left the car. Follow the signs to pay for parking; in some places, you may need to park with two of your wheels off the street.

The sections above will help you drive your best while in Germany. Remember to check for any local regulations in the areas you will be traveling.

In a word, Germany is colourful.  What is meant is that there are so many things to see and do and in so many interesting locations that there’s hardly a town where you can’t find something in your German car rental.  Here are three cities certainly worth discovering.

Until the end of the Cold war, this city was split in two by a heavily guarded wall that bore the city’s name and all that remains today are graffitied portions for sightseers and is definitely worth an Instagram. With the city’s unification came an abundance of German accommodation making it possible to stay in affordable and some very interesting lodgings.

Near the wall is the Topography of Terror exhibition with free admission and offers an insight into atrocities that occurred during the Nazi period.  Berlin is Germany’s capital city and the government building (Reichstag) is open to the public where it’s possible to go up to the glass dome and get a 360° view of the flat cityscape.

Less than an hour’s drive is Potsdam, 35 km (22 miles), where the ruler Frederick the Great had his palace (Sanssouci) surrounded with amazing gardens and very worthy of many selfies.  Another destination is Peacock Island (Pfaueninsel), 30 km (19 miles) on highway A115 that is truly magical and relaxing for walkers and lovers with a short ferry ride, castles and strutting peacocks.

Situated on the Rhine River, follow your nose to the Schokolade, a chocolate museum and factory, but only if you really love this delicacy made from cocoa, which happily includes a mega number of people.  If you need to have one photo of a cathedral on your trip, the Gothic structure in Cologne would certainly rank up there.  Also, riding the cable car across the river makes you truly appreciate just where you are at the moment and requires a digital capture.

Cologne is on the fringe of the famous Mosel wine-producing area. Travel about 38 km (24 miles) along the Rhine River through Bonn, Ludwig van Beethoven’s birthplace, and in about 1 ¼ hours you’re surrounded by wineries, schlösser and stunning scenery.

Another area southwest of Cologne is Phantasialand in Bruhl, 26 km (16 miles), one of Germany’s largest theme parks that boasts having Europe’s longest theme-based underground ride.

This German city has photogenic charm with one of its main pleasures being able to sit in the town square, the Römerberg, with a beer and people-watch.  This city is a great starting point for some of the extremely picturesque areas nearby such as Rudesheim, 65 km (40 miles), in a wine making area with its storybook-like buildings and vineyards that roll into the Rhine River with castle ruins perched above.

Driving south to Heidelberg, 88 km (55 miles), brings you to the red sandstone Heidelberg Castle overlooking the town and is accessed via funicular.  Just by walking through the town, particularly the old portion makes it understandable why authors such as Mark Twain were inspired here.  Also of interest is the Student Jail that saw its last offender from Heidelberg University about a century ago, and be sure to get Instagrammed with your face inside the monkey’s head at the entrance to the bridge.  It’s all about doing the things you want to do by using your rental car from Cheaperthancars to get there.

At Cheaperthancars and Cheaperthanhotels we believe that the less you spend on our deals, the more you will to spend when you get there.  Enjoy your trip to Germany

Frequently asked questions about renting a car in Germany

1. What is the best time of year to book a rental car in Germany?

2. Is it possible for one way rentals in Germany?

3. Should I rent a round trip or one-way rental in Germany?

4. Which location should I rent my car from in Germany?

5. Do I pay more fees and taxes for renting a car at the airport in Germany?

6. What insurance do I require for driving a rental car in Germany?

7. What is the best way to save money on rental car insurance in Germany?

8. Should I prepay my rental car booking in Germany?

9. What are the largest numbers of vehicle seats available for a rental car in Germany?

10. What types of sports and special cars are available in Germany?

11. Can I take my rental car across borders in Germany?

12. How do I inform the rental company I will be crossing a border from the Germany?