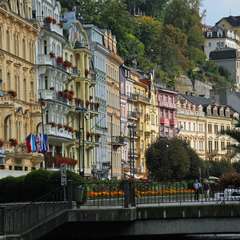 About the Czech Republic (CZ)

Once home to the Bohemian Kingdom, the Czech Republic (CZ) now officially, Czechia, is a historically important and landlocked country in the centermost of Central Europe, bordered by Germany, Austria, Poland, and Slovakia. The republic is loosely divided into eight regions, led by Central Bohemia and the urban focus of Prague; and to a lesser extent, West Bohemia and the city of Pilsen. Despite Czechia’s lack of coastline, the country offers a diverse range of natural and geographic attractions, including dense forestland, sprawling grassland, extinct volcanoes, a minor mountain range, and an extensive river system. However, most visitors come for the rich and varied history of landmarks left behind by the Hapsburg-Austrian Empire.

They say that all Czechian roads lead to Prague, but literally speaking, most major cities are in fact linked by a high-speed motorway ring-road system that originates in Prague. On the other side of the coin, the majority of the country that’s not in a major city is connected by a haphazard collection of second-class and third-class routes that are in the process of upgrades that many Czechians say will take decades to complete. The good news is that the first-class motorways will take you to the top destinations. The bad news is that congestion is common all throughout the country, as everybody is trying to avoid the construction delays and detours of lesser routes. Otherwise, a private vehicle is the most efficient and economically sound mode of transportation for visitors.

Car rentals in the Czech Republic (Czechia) are furnished by the biggest names in the business: Europcar, Sixt, Budget, Avis, Hertz, and Thrifty. Choose from a wide variety of vehicle types, including minicars, the complete spectrum of 4-door sedans, estate wagons, SUVs, and 7-12 seater minivans.

Tips and advice for renting a car in Czech Republic

For driving on Czechia first-class roads and European routes, a vignette is required. Have a chat with your car hire provider if you plan on doing any kind of long distance driving. However, for stays within Prague, you generally can avoid using motorways. In any case, vignettes can be purchased a fuel stations throughout the country.

If other cars are flashing their lights at you, they’re trying to tell you that your daytime running lights aren’t on — which is mandatory in all of Czechia.

Getting a cheap car rental in Czechia is much more likely than most European countries — with the exception of Estonia, which has the lowest rates in the region. Meanwhile, fuel prices are also below the regional average. Two more economically sound reasons to rent a car.

Fines for traffic offenses in Czechia are generally due immediately. Some police cars are equipped to handle credit card transactions, but if not, you’ll be expected to produce cash on-the-spot.

Make sure your car rental in Czechia is insured for damage caused by road conditions. Locals emphasize the poor condition of many second and third-class routes.

The central European nation Czech Republic is divided into three territories; Bohemia, Moravia and Silesia.  The capital, Prague, in Bohemia is best known, but we’ll focus on other cities as a representation of all areas.  In your money-saving Czech Republic rental car travel to all places or focus on a region.  Let’s begin our trip.

A photogenic city in South Bohemia (about 2 hours from Prague) and situated on the Vltava River that bends through the town, there are a number of great locations by the water to have a meal and a beer.  After all, this is the Czech Republic where pilsner beer was first developed.  In keeping with the rest of the country, the town has a superb castle where you can climb to the bell tower for some incredible pictures of the town and countryside.  There’s also a large complex of medieval monasteries that can be toured, and remember this is an old town dating from the 13th century so it has some unforgettable Czech Republic accommodations.

As mentioned, beer has a deep history in the Czech Republic and it’s where Budweiser began.  In České Budĕjovice, 25 km (16 miles), tour the original brewery that started this beer to become an American legend, and climb the Black Tower for commanding views of the region.

The Šumava National Park, 54 km (34 miles), boasts various topography and is extensive.  Although it is easily reachable from town, the sheer size of the park makes the area around Lake Lipno as the most feasible to see, hike or bike.

Situated in Moravia, it’s the second largest city in the country and a major wine-producing area as witnessed by rows of grape vines in the region.  The city is a blend of historic charm and modern architecture featuring famous Bauhaus design.  World-renowned architect and designer Mies van der Rohe built a family villa at this location in the 1930s that is open to the public. The Náměstí Svobody is a delightful square surrounded with colourful buildings including the somewhat controversial House of the Four Mamlases.

The Caves of the Moravian Karst, 20 km (12 miles), are an absolute must to visit and great material for your GO camera that include a boat trip along an underground river. A drive to Olomouc, 78 km (49 miles), puts you in an area of the country that is pristine and ripe to explore with the region’s Jeseniky Mountains that offer events and activities to suit everyone’s taste.

When visiting this university and former coal mining town and you want entertainment, be sure to go to Stodolní Street that has been called “the street that never sleeps”, with its multitude of bars, clubs and street food vendors. The Silesian Ostrava Castle is not only a fine example of Renaissance architecture, but also features a museum of witches and a torture exhibition.  Prior to renovations, this castle sunk as much as 16 meters (53 feet) into the ground over the centuries due to subsidence from mining activity.

A 30 km (19 miles) drive can bring you to Raduňský Zamek to view a stately chateau situated in an English-style garden and voted one of the most beautiful structures in the Czech Republic, or travel to Opava, 32 km (20 miles) that was the former capital of the Silesian region.  A to-scale model of the solar system is spread over the town and in nearby villages so you can walk or drive to find all the planets.

With your Czech rental car from Cheaperthancars you can fully explore this fascinating country and stay in Czech accommodations from Cheaperthanhotels, knowing that you’re saving money to allow you to do the things you really want to do. We really do believe the less you spend the more you can do when you get there.

Lovely mountain scenery, great cities, and romantic getaways are what most people associate with the Czech Republic, but if you’re driving, there is much more to think about. So have a look at these top driving tips for when you’re driving on Czech roads:

Czech law requires that you carry with you, when driving, certain documents which you may be obliged to produce at any time:

These are the following speed limits that you must adhere to at all times:

Also, vehicles with a trailer travelling on open roads are restricted to 80km/hour (50mph).

There are many radars placed on roads in the Czech Republic, which are monitored closely by Police. If you are detected for breaking these speed limits, then fines are often imposed and collected on the spot. You will also have points taken from you, affecting your opportunity to drive again in the Czech Republic.

The Czech Republic operates a zero-tolerance towards alcohol and drugs. If you are found with more than 0mg of alcohol in your blood, you will be issued an immediate fine, and will be liable to go to court and face imprisonment for up to three (3) years. Depending on the situation, you may have your licence seized and be unable to drive.

Obligatory routine testing can be carried out at any time.

Parking in the Czech Republic is only permitted on the right side of the road, but that is not applicable to one-way streets.

You are prohibited to park within 5 metres of - a junction, a public transportation stop, a pedestrian crossing and within 15 metres of a train crossing.

You can be clamped or towed away if you park in restricted places which are clearly marked by yellow lines that strictly prohibit parking.

You will also be towed away if you have parked in a dangerous manner that obstructs anyone or any vehicle. You will have to call 158 to find out where your vehicle has been taken.